„12 DISCIPLES DISCOVER THE DIVINE WITHIN, detail“ 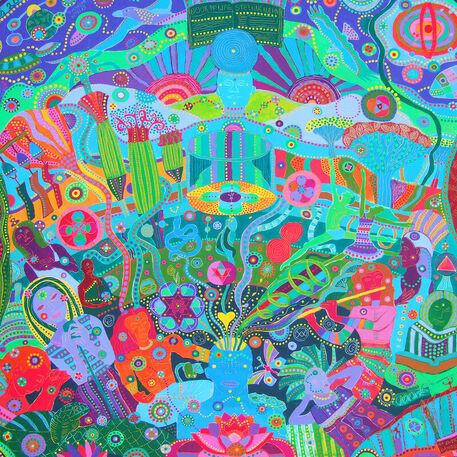 Once upon a time there was a group of 12 friends who completed their tasks during the day and met at night. They were young, rebellious, reckless and yearned for freedom. They spurned old rituals, conventional expectations and limiting ideas. They travelled fast, pushing everything aside to find the next stimulus, the next laugh, the next ride before returning to their daily routine. Life was a series of extreme highs and extreme lows, and each fuelled the other until the friends were weary, depressed, addicted and “burnt out“. But their hearts were still burning, bearing a flame of hope that one day, they would find another way.

They instinctively knew that this day had arrived when, during intense wanderings (and intense wanderings of the soul) they discovered a sign saying NO ENTRY: DANGER. In this lonely and desecrated place, they felt that they had reached the end of the world. Beyond the sign lay a very high wall. It was obvious that some people had already attempted to cross it, for old ladders lay rotting on the ground.

But not all sounds were heard by all the twelve. Their inner “antennae“ picked up the sound which attracted them most. It was almost as if one special sound was calling them saying THERE IS NO DANGER HERE: ENTER AND BE FREE. THIS IS YOUR CALLING. And the call was so strong that they ignored the sign and climbed the wall, to be greeted by a world so expansive, so strong and potent that it took their breath away. It was as if a GREAT SACRED STILLNESS suddenly poured into their troubled minds, allowing them to focus on THEIR TRUE NATURES and THEIR TRUE VOCATIONS.
One by one they searched the beautiful landscape for the origin of the sound which had entranced them – the flute player, the snake shedding its skin, the waving trees, the deep breathing of the meditating monk, the iridescent butterflies, the singers and dancers and readers who were all LIVING THEIR DREAM FULLY, ALL AWARE OF THEIR INNER STRENGTH, ALL CONNECTED TO THE DIVINE, ALL IN THE FULL KNOWING OF THEMSELVES AS GODS.    As the twelve wandered through this paradise on the other side of the wall, they could easily have lost their way, being forced to return, but their ears were continually alive to the sounds, and their eyes were continually searching for signs to show them their very own sacred path - signs of harmony, wisdom, nurturing, life, balance, rebirth, transformation, growth, eternity, exuberance, abundance, dedication and love. The more signs they noted and followed, the more convinced they became that their direction was being managed by DIVINE ORCHESTRATION, and that their destination was similarly DIVINE.    They moved from one stage to the next, through 12 stages of spiritual development, which simultaneously caused 12 changes in their physical development. As their concept of all things possible expanded, they connected telepathically with other souls in their group, with angels, with entities in unseen realms and on other planets, until they realised that they were actually CONNECTED WITH ONE GREAT DIVINE WHOLE, and that a part of that Divine Whole RESIDED IN THEM.    As large wise creatures with hearts now full of love, the 12 often looked over the wall in the direction of where they had come. They called it EARTH, and longed to take a piece of “HEAVEN” there to alleviate the pain of its ihnabitants. They realised that this was their mandate – to strive until all earth resembled the garden which they had discovered beyond the wall. And so they started to sing, read, dance, meditate and breathe, so that those on earth would have enough patterns, signs and DIVINE INSTRUCTIONS to follow them over the wall.      This painting contains the following symbols and elements:  - Symbols of The Tree of life, Compassion, Wisdom, Strength, Inner Security, Eternity  - Divine Geometry: a representation of Thoth’s “as above, so below”, 3 representations of the Flower of Life, and triangle symbolising the TRINITY of FATHER, SON AND INFINITE SPIRIT  - 3 snakes symbolising transformation  - Lotus symbolising Paradise at the centre of the greater universe  - Cross-section of 12-strand DNA (strands connected due to increased courage, focus, balance, health, bliss, personal truth, state of grace, centeredness, harmony with others, knowingness, balanced expression of power, unconditional love)  - The seven mansion worlds (cf. “My Father’s house has many mansions”) where many souls moving on from earth take up their learning journey.  - The Pleiades Constellation showing orbital paths (including the path of our solar system) in relation to the photon belt which we enter every 11,000 years. The belt is presently raising the vibration of our planet, acting as a catalyst for positive change and exposure of low vibration scenarios.  - The two suns we will have in the future.  - The Book of Life in which our STELLAR NAME is recorded once we merge with our DIVINE CORE and start the eternal spiritual journey.  - Seeds and seedlings representing great potential and growth according to a divine blueprint.  www.rosiejackson.de