from the gallery of darkrubymoon 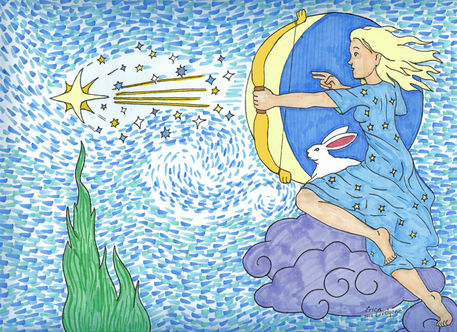 This drawing was originally designed as a tattoo creation for a friend for whom has a special connection to falling stars. This image was done with Copic Markers and pen and Ink. The background was inspired by Vincent Van Gogh's famous painting titled 'Starry Night'.

The ancient Greek Goddess for Falling or Shooting Stars was the Goddess Asteria. "Asteria was the daughter of the Titans Coeus and Phoebe and sister of Leto.[2] According to Hesiod, by Perses she had a daughter Hecate." (wikipedia)

The Titan goddess of prophetic dreams, astrology and necromancy, Asteria flung herself into the Aegean Sea in the form of a quail in order to escape the advances of Zeus. (wikipedia)

"Asteria (pronounced as-TARE-ee-uh) is the Greek Goddess of the oracles of the night, such as astrology and dream interpretation. " [link]

Asteria means the island, which has fallen from heaven like a star. [link]

"The Name Astraea is a girl's name . The origin of the baby name Astraea is Greek with the meaning(s) depending on Gender/Origin being Greek- Star, Bright Astraea has the following similar or variant Names: Asta Astah Astera Asterah Asteria Asteriah Asterius Astira Astirah Astor Astra Astrah Astraea Astraeah Astrea Astreah Astread Astred Astrid Astyra Astyrah Estere Esther Hester "    "Easter celebrations were held hundreds of years before Christ was born, as festivals of spring honoring Eastre the great mother goddess of the Saxons, who's sacred animal was the hare. This name was fashioned after the ancient word for spring, Eastre. The goddess Ostara was the Norse equivalent whose symbols were the hare and the egg. " "The use of the egg goes back to ancient Mesopotamia where it was closely identified with another goddess of fertility, Astarte. The following quote from the ancient Egyptian historian Hyginus explains the connection: “An egg of wondrous size is said to have fallen from heaven into the river Euphrates. The fishes rolled it to the bank, where the doves having settled upon it, hatched it, and out came Venus, who afterwards was called the Syrian Goddess [that is, Astarte].”    Asteria is also sometimes liked with the Greek Goddess Artemis who is also equated with the Roman Goddess Diana, Goddess of the hunt. "Of the daughters of Koios, Asteria in the form of a quail (ortux) threw herself into the sea while fleeing a sexual union with Zeus. A polis was originally named Asteria after her: later on it became Delos. The other daughter Leto had relations with Zeus, for which she was hounded by Hera all over the earth. She finally reached Delos and gave birth to Artemis, who thereupon helped her deliver Apollon." [link]    Artemis later became identified with Selene,[5] a Titaness who was a Greek moon goddess, sometimes depicted with a crescent moon above her head. She was also identified with the Roman goddess Diana,[6] with the Etruscan goddess Artume, and with the Greek or Carian goddess Hecate.[7]    Rabbits are typically symbolic of the Moon as in most cultures, when people look to the moon, they see a rabbit on the moon.    Visit DarkRubyMoons website at http://darkrubymoon.com/ for all sorts of great activities, artwork and much more. Be sure to check out DarkRubyMoon Store for my artwork on all sorts of fantastic items from T-shirts and prints to clocks and camcorders at the following web locations.    * DarkRubyMoon Store CafePress: http://www.cafepress.com/darkrubymoon  * DarkRubyMoon Store Zazzle: http://www.zazzle.com/darkrubymoon  * DarkRubyMoon Store Printfection: http://www.printfection.com/DarkRubyMoon

There are no comments yet, be the first!