from the gallery of Giovanni Scifo 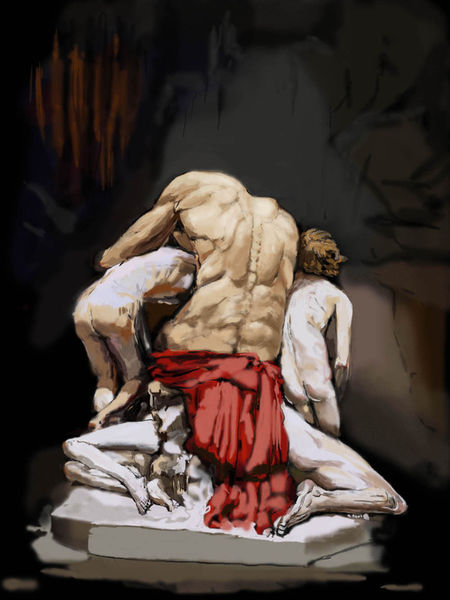 Count Ugolino della Ghererdesca was accused of one of the more heinous crimes in Italian history. The alleged crime took place in the Pisa of 1289, but we all know that Italians and art and literary historians take a longer view.

The known facts are as follows. The Count was a leader of Pisa's Guelph (pro-Papal) faction in the seemingly interminable internecine battles that consumed all the northern Italian cities in those days. Ugolino had earlier conspired with the local Archbishop, Ruggieri degli Ubaldini, to come to power in the predominantly Ghibelline (pro-Holy Roman Emperor) city. But, as might have been expected in times of constantly shifting alliances, and with a change of Popes, Ruggieri had switched sides leaving Ugolino undefended. The Guelphs were routed, and Ugolino, along with two sons and two grandsons (nephews, in some versions of the story), were imprisoned in Gualandi Tower, one of the medieval towers overlooking Piazza dei Cavalieri, which is still the central Piazza of Pisa. On orders from the Archbishop, they were all starved to death, and, since then, the tower has been called Torre della Fame, the Tower of Hunger.

Exactly what happened in the tower has never really been known, but it wasn't long before rumors surfaced that, to save his own life, Count Ugolino had devoured the younger men as they died one by one. Dante, in Canto 33 of his Inferno meets the Count in the lowest level of hell and discusses the case. According to Dante, Ugolino explains his presence in this deepest pit: he admitted that he had eaten his kin, having allowed his own desire to survive to overcome any gustatory scruples. Dante finds Ugolino gnawing on a skull, and Ugolino says that it is the skull of Ruggieri, the erstwhile friend who had betrayed and imprisoned him. Based on his own literary admission, Count Ugolino has come down through history as the Cannibal Count.