from the gallery of Catalin Precup 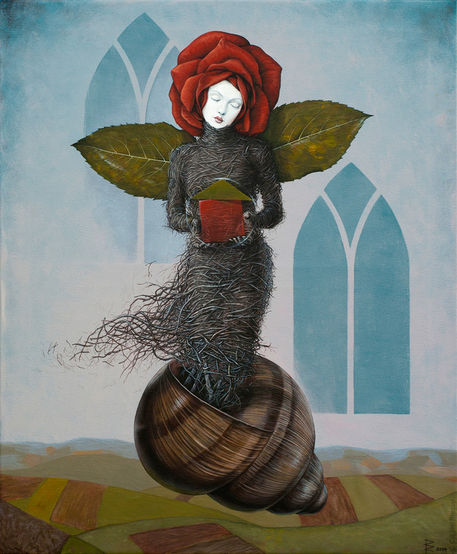 An allegory on the idea of home/family, the double, duality male/female, yin/yang, polarity, balance, harmony, love, positivity, prosperity. It uses a blend of subjects and symbols inspired by art-history, folktales, mythology, alchemy, religion, philosophy. The main and only fictive character may be a fairy, a household deity (a kind of Schutzgeist, let's say), a fertility goddess (like Flora), Fortuna - the personification of luck, Venus - the beauty goddess, born from a shell, a guardian angel, or all at the same time.
The snail shell epitomizes the idea of home and protection + logarithmic spiral. Also, the snail is androgynous; which brings us to the alchemical Rebis and to the primordial androgyne which is an image of reunification of the polar opposite, complementary and even contradictory elements of the human being.
The initial androgyne is an anthropomorphic figure of the Cosmic Egg.
In Kabbalah the snail is mentioned, out of all creatures, as the quintessential metaphor for the beginning of creation.
The shell could also be interpreted as an alchemical oven.
The white face may look like a mask, but it's an egg. And the entire body is a nest, a large elaborately woven human-form bird nest.
The egg-head is also protected by a rose which looks like an intricate coiffure/headdress and, in the same time, resembles a halo (red rose = love, beauty).
The rose's leaves simulate some wings (similar to that of a fairy), symbolising freedom, power, ascension, the divine. Also, the number 2.
The nest is a metaphor for firmness and flight, equally.
The geometrical shapes are the substitutes of a house, sugesting that protective power is the character's main attribute. Notice the complementary colors (red and green) = the union of opposites, the conjunction.
The two lancet windows are echoing the space of a church, extending the sacredness into the scene/universe.    So, the unusual fairy/goddess coming out of a flying/levitating snail's shell on a background landscape with hills and windows personifies protection, unity, stability, hope, reverie, fantasy, mistery...    The title is "(Der) Geist", I choose it because it's equivocal, its meanings are complementary and bears religious undertones and Hegelian connotations: spirit, mind, and also esprit, ghost, soul.