I like beautiful things and therefore I want to aspire to
create beautiful works. I gather inspiration from everything and anything. I am always on time and I put my heart into everything I do.

Born in Australia in 1982, Kareem Rizk is a Melbourne-based collage artist, illustrator and designer who graduated from Monash University in 2004 with a Bachelor in Visual Communication.

After graduating, Rizk’s creative interests began to turn to fine art and illustration, particularly mixed media collage. While working as a Graphic Designer at Melbourne’s No.1 selling newspaper, The Herald Sun, his interest in collage continued to develop and by 2006 it became a focus of his endeavours.

Since his shift of focus to fine art and illustration in 2006 and his pursuit of developing his style, Rizk has gained extensive international recognition and has been noted as one of the contemporary masters of collage, as well as one of the premier mixed media artists working today.

Working mediums include collage, acrylic, oil pastel, pencil, solvent transfers and acrylic transfers. The work is highly textured and often multi-layered with a nostalgic and weathered quality. Rizk’s works can often be vibrant with colour, while others display a very refined or minimal palette.

Working methods also extend to digital collage with a very gritty and realistic display of texture and layering. The digital work began as an experiment in blurring the line between handmade collage and digital collage.

Other work includes freelance illustration, design and art commissions for various clients including news and editorial publications, galleries, university institutes, the boutique fashion industry and the music and entertainment industry.

Amalie Anderson has uploaded The Witches of Eastwick 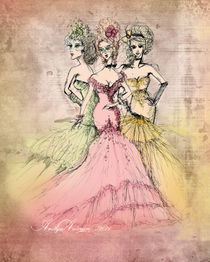 The Witches of Eastwick

The Witches of Eastwick: grunge, fashion and beauty