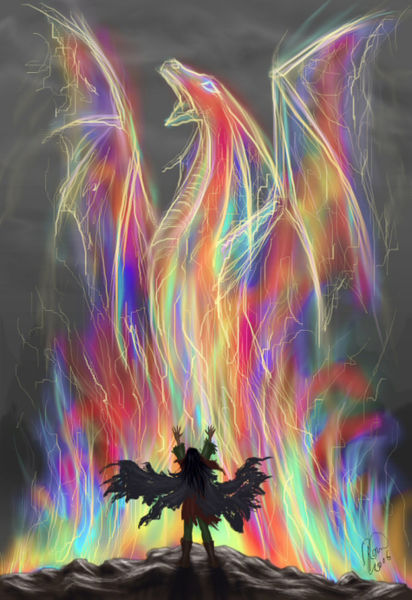 ...Beams of vibrant light shot from the misty chasm below, snaking up into the grey sky. The sharp, dull rocks shuddered as a power beyond comprehending sprang to life. Golden cords of energy seemed to entagle the beams of colour, binding them together to form a fragile, net-like apparition of a strange creature. Opening wide its mouth, it screamed at the colourless sky, flapping its wings against the cold cliffs. The shimmering, jigsaw-like colours of the creature quickly grew in vibrancy until a human would've been blinded by the mere glimpse of it. Then, the golden cords binding the colours together seemed to burst.
And an explosion of colour swept through the world.

The summoner, stunned by the ordeal, awoke on the rocks. Shaking his head to clear it, he glanced up... and straight before his face, he saw a small, fragile plant, shooting up with unnatural speed. A young, tender green that in its brilliance dwarved the surrounding mountains filled its leaves, which were aglow with a new life. The summoner spent lingering moments without rising, simply savouring the colour of the plant. Then he regained his feet and looked around.
The colourless sky had regained the unmatched blue hue that had not been seen in these lands for several centuries. All over the rocks, moss was beginning to grow, a soft carpet of a deep emerald tone.
The summoner began his descent down the mountain, away from the chasm. As he walked, the sun bent lower towards the horizon, until, when he looked up one moment, it had passed into a sunset that made him freeze in his tracks. Golden light filled the horizon with a soft brilliance. The clouds around were cast in a light that was somewhere between orange and salmon pink, with dark, lead-coloured shadows that provided magnificent contrast.
Colour - and life - had again returned to a grey, dead world. In centuries, the colours would dim and fade again, and life would simply cease to exist. Then he would, as countless times before, summon the entity to ressurect the lifeless world. The summoner would always be there.