„GAIA'S RECONNECTION TO THE UNIVERSE“ 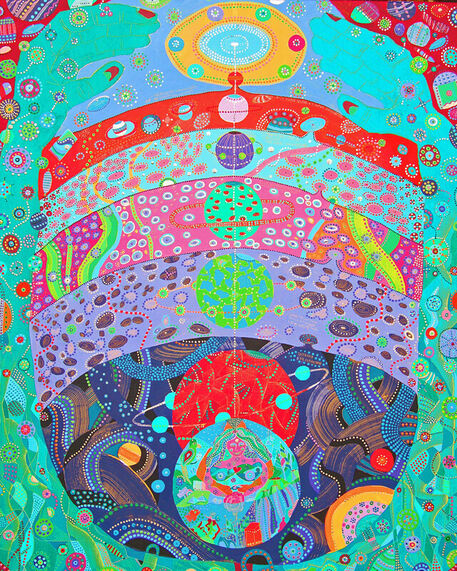 GAIA’S RECONNECTION TO THE UNIVERSE
A VISION OF OUR FUTURE
Acrylics on canvas, 1,20 x 1,00 metres, by Rosie Jackson 2011

At the bottom of this painting is a depiction of our planet, also known as Gaia, Mother Earth or Urantia. Earth is often regarded as a piece of large rock (floating in an even larger empty space) which has randomly and uniquely developed the “right” conditions for the evolution of the human race. Contrary to this view, Gaia is presented here as an ensouled being, in an ecstatic state of peace and joyous serenity, following an intense spiritual search and transformation – a vision of our future.

We are in the transition period of great changes and increased spiritual energy which has been heralded by so many different sources and which involves a parting of the ways. Like her inhabitants, Gaia is being invited to assess her position, adapt her behaviour, make her decisions, rebalance herself and set a new course according to new values, manifested on a physical level as strange weather patterns, volcanic activity and earthquakes. In this painting, the volcanoes have died down, the air and oceans purified, the secrets of ancient pyramids revealed, the plant life abundant, and the balance between nature and mankind harmonious.

The most significant change on Gaia is the return to spiritual values, the sense of belonging to a greater whole, the knowledge of the Divine Creator and our own divinity, and the wish to co-create heaven on earth. A line of golden dots rises from the crown chakra at the top of Gaia’s head until it finally reaches the golden disk of Paradise, the residence of what some call the Divine Source, or God, or universal love. With this secure anchorage, Gaia is now allowed to see the far reaches of the universe – a connection previously broken due to our deviant behaviour. Now she sees the purple swirls of nearby planets, including Venus and Jupiter (bottom right). Above her are the systems and galactic strata of which she is a member. The large green arms of Creation hold the whole universe in their hands.